Basketball is a game of runs. The Hawks seem to be the only team in the NBA that refuses to accept this reality, despite being one of the most exciting teams in the NBA when they’re making a run of their own. Heads go down and the morale of the whole team drops when other teams go on runs against the Hawks. This is the root of all the inconsistencies of the Hawks this season. You don’t know what Hawks team is going to show up to the game, leaving most to question how motivated the team is to play under first year Head Coach Larry Drew.

If they don’t care to play hard half the time, how did they finish the season 5th in the East? Talent. The Hawks boast two All-Stars, a third player of All-Star caliber and the league’s reigning sixth man of the year. When they decide that they want to play hard, they’re pretty good at it.  The Magic know that first hand as the Hawks accounted for 3 of the Magic’s losses this season.

It is good to know Hawks players do have ego’s after the Magic beat the Hawks in what may have been the most lopsided playoff series in NBA history (Average margin of victory was 25.3 points per game). 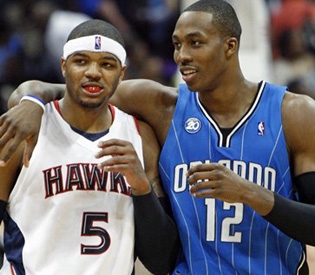 The Hawks seem to like playing against this new-look Magic team and I do believe that it will be a competitive series. The advantage the Magic have now it that the style of play changes in the post season. It slows down and allows Dwight Howard to have more of an effect on the game. Dwight Howard is the most dominant player in the NBA as he changes the game on both ends of the floor. Dwight Howard is the most valuable player in the post season because of the change of pace.

During the 4 regular season match-ups, the Hawks did a good job of playing Dwight straight up, without double teaming, and staying home on their shooters. If you can effectively guard Dwight that way, it is the best strategy against the Magic.

I believe the Hawks are the better team and if both teams were to play to the best of their abilities, the Hawks would win the series in 6 games. Unfortunately, I am not willing to buy in to a team with such inconsistencies.

I have the Orlando Magic moving on after an entertaining 7 game series.